I openly admit that I am a scavenger. I probably won't eat the rest of your plate, but I'm not ashamed to dig in the dirt or walk through some alleys to find materials and keepsakes. Sometimes these finds arrive first, but sometimes the ideas come up before I have the right components. My most recent piece, Osseofrenda, was an idea for a few years before the right pieces came together. Of the two found components, one came from a yard sale, and one came from a graveyard.

It isn't nearly as grim as it sounds, I promise. Many of my ideas come to me without meaning. I don't mean that in a grand visionary way, just that I don't know what these images in my head mean when I see them and feel the urge to make a note of them somehow. Usually they become clear in a blank moment sometime long after the piece is done. In this case the idea was about giving to your detriment. Think The Giving Tree.

The first piece I found for this idea was a bone in the woods on a hike. It seemed perfect, it was a vertebrae in good condition. Most importantly, it wasn't human. Rule #3 of scavenging. I kept it around for a few months while I waited to find the piece of wood. In the meantime, a dogsitting incident rendered the bone in less-than-awesome condition. My dog Yoshi doesn't really act like a dog, so I forget, dogs and bones don't really pan out when you leave the room. Canine providence, really. I'm not apologizing for typing that.

After a few months with no bone or wrecked chunk of wood to be found, Grace and I set out on a trip to Santa Fe. It didn't go so well. Grace received the wonderful anniversary gift of food poisoning. Luckily, the drive home was in good health, so we could enjoy the amazing drive as it should be done, complete with roadside stops and conversations with cows.

On a particularly high part of the road we pulled off at this mountainside cemetery. We both tend to enjoy visiting graveyards. She likes it because it's a photographer's heaven, and I like it because I'm from Rome, Georgia. There is only so much to do, and Myrtle Hill Cemetery was Top 5. Not as creepy as it sounds, I swear. 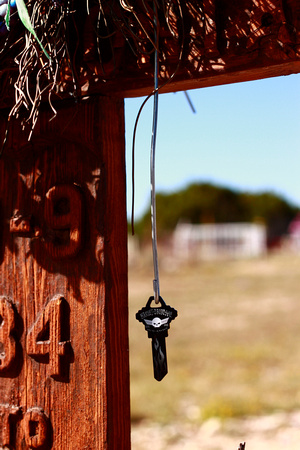 This place was different than any cemetery I had visited before. You felt like you knew the people. The grave sites were so elaborately decorated with the person's character and story. It was very colorful and personal and full of biker memorabilia. There were full-size metal sculptures, helmets, keys, and little notes. Walking around there I found my perfect piece. I knew when I saw it, that it belonged to that idea. The rusty nails, the peeling layers, the shape of it - it was all perfect. I could see the hand reaching out from it immediately.

The bone finally showed up about a year later. A self proclaimed "junk man" was moving away from his place near my work. I had previously bought the parts to make my dining room table from him, and he always had interesting rusty stuff laying around that he would part with for cheap. The catch was that you had to stay for an intensely personal 15-minute conversation with a man you barely knew who may or may not be drunk. It was worth it every time. I had pulled together my usual assortment of rusty art supplies and odd storage containers when I spotted some bones hiding behind an old tabletop. It isn't unusual in Colorado to just have bones in your front yard. Its part of the charm. He didn't remember where they came from or why they were there, but he was willing to throw them in with my pile. When I picked it up a tiny spider crawled out of the center. The bone was more perfect than anything I'd imagined I'd find. As for the hand, I didn't find that, you can rest easy. It was sculpted. I don't want to spoil everything, so I'm keeping that quiet.

Sometimes you don't get exactly what you want when you're working with found objects right off the ground. This time each piece I found developed the idea beyond anything I could plan for. It can take years for the pieces to show up, but I always find that it is worth the wait. I have been very surprised by the response to this piece. Thank you for checking it out and thank you for all the kind words, this is a special piece to me.