the wire and recording

March 17, 2014  •  Leave a Comment
I am very excited to present my first fully finished song in a while, The Wire. This one has been a long time coming. Please have a listen, download it, take it with you, enjoy it!
People often ask me, "Why do you make music?" Actually, no one asks me that. Unless I am paying them and they are in a chair. I'm usually on a couch in these situations. But this is what blogs are for, right? Answers to questions you've never asked, from someone you don't necessarily talk to.
So, why do I make music? It is a compulsion and a craving. A source of energy when I'm heading towards the bottom. A place to express myself when the rest of the world tells me to fall in line and be quiet. 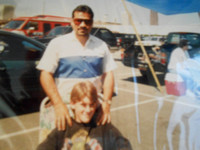 Me and Dad, early '90'sMy Dad and I at a Fox 97 Oldies concert in Atlanta. We saw Little Richard, Chuck Berry, and many more at these.

My starting point is my Dad. He has always loved music and it has always been  part of our lives. Growing up, he managed a Camelot Music store at the mall. This meant all the "promotional use only" CD's I could ever want and the awesome ability to go to the back room and stay after the mall closed. Excessive cappuccino and Beavis and Butthead jokes for all. It also meant tons of music, new and old. I won't even go into the impact album artwork has had on me. Another time.

Fast forward to college and I had several years of singing, writing, and performing under my belt. I had to go to school out of town. Eventually the distance was too much and I got kicked out of my band. I floundered around trying to find a place to fit in creatively. I never actually found another band that suited me after that. I answered ads and went to try-outs, but nothing ever felt right. I never stopped singing or writing though.
One day I answered an ad for a weekly paid recording gig in the Flagpole magazine. The guy sent me an instrumental track, as well as a loose idea of the melody he wanted. His name was Mark Lord and he recorded as Whereabouts Underground. The music was bluesy with a little country to it. I needed some money and wanted to sing, so this was a no-brainer. When I arrived at his place, Mark offered me a Mountain Dew and we talked for a while. He always had a soda for me when I got there. He told me that he recorded all of this music on his own and just reached out for help on vocals because he didn't feel like his were up to the standard he wanted. He just set up with a little Boss recording station and did his own thing. He didn't worry about shows, or merch, or how to make ends meet, he worried about expressing his ideas. It was beautiful. It was such a departure from the starry-eyed plans of youth and dreams of making it. I didn't want that pressure, but I needed to sing. Mark's creative autonomy was amazing. There were no politics,no questions of dedication, just music. I decided to try it myself.

I recorded 10-15 songs with him throughout the year and eventually asked if he could help me record something of my own. It wasn't actually my own, but I loved the song as if it were my own and I had been given permission to record my own version. I brought some borrowed equipment over and recorded a full song that day, some of it improvised  on the spot. The rhythm was completely off, but I had recorded something on my own. I could do this. I just had to learn some more instruments and how to record. No big deal right?

I spent years collecting equipment and learning everything I could. Through many missteps and basic mistakes I found ways to document the rambling ideas and make them what I wanted. Finishing them...that was another battle altogether. But here we are. The Lotus Operation is happening and I have The Wire to play for you.

Some people may see this and think, "Big deal, its just one song." But it is a finished song. And there will be more to follow. For me, it is the furthest I've gotten on my own. It is a symbol of me pushing myself creatively in a way I never though I could. I'm excited. I hope you enjoy it as much as I have.

I couldn't have done this without Nick Fiore. A huge thank you is in order for his superb drumming and recording ability. If you need drums, this is your guy, nickfiore.com. Thanks for listening!